The Urban Winery in Silver Spring, Maryland is located inside the DC Capital Beltway and was the first winery in our region in an urban environment. We offer over 30 wines produced on-site as well as a selection of other hand crafted wines, beers, and spirits produced in the state of Maryland. Our international wine selection represents other small producers from around the globe and features a wide variety of grape expressions for those who truly wish to explore the whole wide world of wine. Our wine shop staff can assist you in selecting the perfect wine to pair with a meal, gift to a friend, celebrate an occasion, or reward yourself for a job well done. In our tasting room you can enjoy a tasting flight and learn more about the wines we make or share a bottle of wine and some light fare in the relaxed atmosphere. Our wine classes can give you an even more in depth look at the incredible world of wine appreciation. Wine making experiences can be booked by those who wish to create their own batch of wine, their own wine story, to share with friends and family. 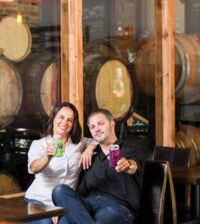 The Urban Winery was created with the understanding that wine is a social occasion. Our wines are best enjoyed in the company of friends and family, a concept deeply instilled in us by owner Georgia Callis’s father, Anthony, known to his family and friends as Bole.

Georgia began making wine at an early age, learning the trade from her father, a Greek immigrant carpenter who started making wine in America in the early 1970s. As Georgia advanced from crushing grapes with her feet as a child, to creating her own wines as a young adult, she met Damon, a Marine, who was determined to marry her. Bole encouraged her to invite Damon over to make wine. It was not only a rite of passage for dating his daughter, but a tradition that has passed from generation to generation, a true test of loyalty and family. Eager to impress Bole and win the hand of his daughter, Damon took them up on the offer and winemaking became a treasured hobby.

Even as Damon left the Marines and became a financial planner and Georgia became a registered OR nurse, their hobby continued to grow into a passion to explore and expand their knowledge. They entered competitions and continued improving their craft. While it was difficult to sway Bole away from his beloved Old Vine Zinfandel, they explored other single varietal wines and created new blends. These wines were created using traditional small-batch methods they still use today.

2013 was a particularly pivotal year, as Bole, an otherwise healthy and strong man, started to deteriorate with signs of Alzheimer’s. Though this was his last year making wine, he always had an enormous smile when he watched his daughter, son-in-law, and grandchildren continue the tradition.

Bole departed in April 2014. His legacy would become the catalyst and motivation for The Urban Winery. In Greece there is the vision of “παρεα“ the concept of family and friends enjoying time together, building bonds, and celebrating life’s experiences. The Urban Winery strives to create the same amazing feeling for others who want to savor the wine and share their stories.

We make not only wine…but wine that tells a story. For our family, it was about being together, sharing, collaborating, sometimes arguing… all part of the adventure…the process…the love and satisfaction of creating something to enjoy year round with friends and family.

From our family to yours,

Want to be part of our team?

Click below to fill out our online employment application.

The Urban Winery now allows you to order your favorite wines from the comfort of your own home.

Please choose from the options below. If you would would like to pickup your order at our location, or ship to an address in the state of Maryland click here. For shipping to all other states (some exclusions apply) click here.